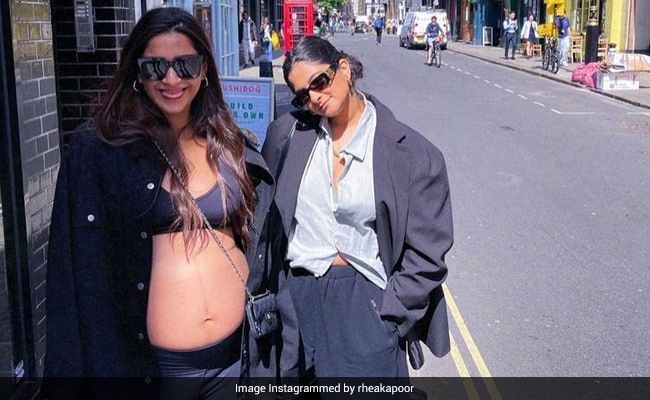 Mom-to-be Sonam Kapoor found the best company in London – her sister Rhea Kapoor and brother-in-law Karan Boolani. On Saturday, Rhea Kapoor shared pictures from her day out with sister Sonam. In one of the pictures, the mom-to-be can be seen happily posing on the streets with Rhea. The other pictures from the album happen to be from the “best meal” Rhea had during the trip. The caption on Rhea Kapoor’s post read: “Rock up to the best meal of the trip like…(So far).”

Mom-to-be Sonam Kapoor has actively been sharing pictures from maternity diaries. On her birthday, she shared these stunning photos from a shoot that she did and she wrote: “On the cusp of motherhood and at the brink of my birthday, I’m choosing to dress how I feel – pregnant and powerful, bold and beautiful… Thanks Abujani-Sandeep Khosla for draping women in outfits that bring out the most fierce and the most sensual parts of their femininity.”

Sonam Kapoor married Anand Ahuja in May 2018 in Mumbai after dating for several years. Anand Ahuja runs the fashion label Bhane and the sneaker boutique VegNonVeg. The couple are currently staying in London.

Sonam Kapoor was last seen in the 2019 film The Zoya Factor, co-starring Dulquer Salmaan and Angad Bedi. Sonam also stared in Ek Ladki Ko Dekha Toh Aisa Laga, alongside Anil Kapoor, Rajkummar Rao and Juhi Chawla. The actress will next be seen in the Shome Makhija’s film Blind. She also had a cameo in Netflix’s thriller AK vs AK, starring Anil Kapoor and Anurag Kashyap.

Rhea Kapoor is a film producer and stylist (largely for her sister Sonam Kapoor). She has co-produced films such as Aisha, Khoobsurat and Veere Di Wedding, all three starring Sonam Kapoor. The sister-duo also runs an apparel brand called Rheson, which was launched in 2017. Rhea Kapoor also launched her ice-cream brand last year. Her husband Karan Boolani worked as an assistant director with on the 2010 film Aisha.