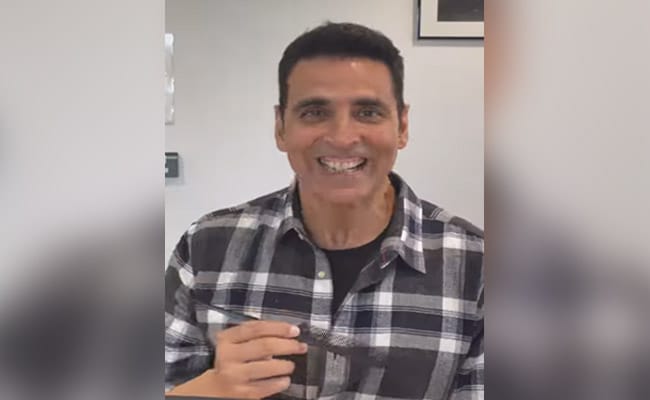 A still from the video. (courtesy: akshaykumar)

Akshay Kumar has several comedy films to his credit that have played a definite part in his rise to superstardom. But the actor is funny not just in his films but also off-screen as he has proved several times in the past. We got a sample of this when the actor shared a video on Instagram. In the clip, he is seen to be adding to the magic of Ben E King’s Stand By Me with a comb and his teeth. Yes, you read that right. In the clip shared on Sunday, the actor is seen in front of the camera with a comb in hand and the iconic song playing in the background. And, to match the tiny beats that are placed between each line, Akshay Kumar can be seen running the comb across his teeth, all while stifling giggles.

Sharing the video, Akshay Kumar said that he had come up with the novel act as a result of his boredom. He also explained that the secret to happiness lies in one’s ability to take a joke on themselves. In the caption, Akshay Kumar said, “Key to happiness: to be able to laugh at yourself. And on that note, here’s an act which is a result of sheer boredom, hope it makes you laugh. Please do laugh, it was actually painful,” wishing his fans a happy World Laughter Day.

While we are in love with Akshay Kumar’s funny video, we are also in awe of just how the actor manages to find any leisure time amid his busy schedule. The actor has a bunch of upcoming films, some of which are ready for release and others that are currently being filmed.  Recently, the actor shared the poster of his upcoming film Ram Setu. In the film, he will be seen alongside Jacqueline Fernandez, Nushrratt Bharuccha and Satya Dev.

Meanwhile, Akshay Kumar has started shooting for the Hindi remake of the Tamil superhit Soorarai Pottru. In the film directed by Sudha Kongara, he will be seen alongside actress Radhika Madan. The original in Tamil featured superstar Suriya and Aparna Balamurali in lead roles.

Additionally, Akshay Kumar will be seen in a bunch of interesting projects such as Prithiviraj, Raksha Bandhan, OMG 2 – Oh My God!, and Selfiee.