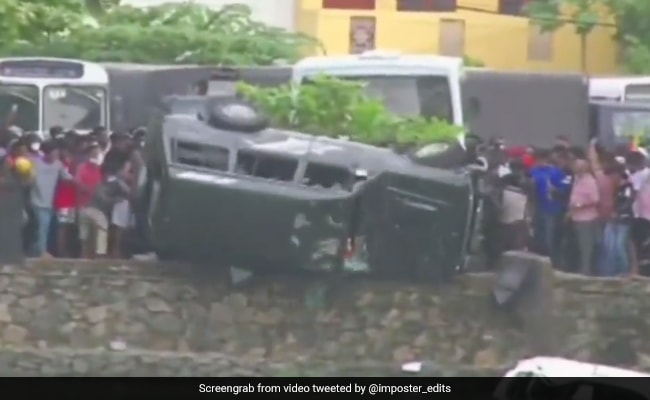 The crowd managed to roll the vehicle onto its side, dumping it into the water.

The economic crisis in Sri Lanka has seen a wave protests in the last month, with some even turning violent in the recent weeks. Although the protests have been overwhelmingly peaceful, the police fatally shot a protester on April 19, and on several occasions have used teargas and water cannons against protesters. The authorities have made numerous arrests and repeatedly imposed curfews.

A video doing the rounds on social media even shows a large group of people surrounding a car that allegedly belonging to a former minister and rolling it into a lake. The crowd managed to roll the vehicle onto its side, dumping it into the water.

In Sri Lanka, Anger over the cost of living the public threw politicians’ cars into the waters.

In the video posted by @Imposter_Edits a man is interviewed where he says “No gas, no fuel and where is essential medications, and People are suffering, people are living with one meal a day.”

Sri Lanka is facing its worst economic crisis since gaining independence from Britain in 1948. The crisis is caused in part by a lack of foreign currency, which has meant that the country cannot afford to pay for imports of staple foods and fuel, leading to acute shortages and very high prices.

The political crisis was triggered in late March when people hurt by long hours of power cuts and essential shortages took to the streets demanding the resignation of the government.

Ranil Wickremesinghe, 73, was sworn-in as Sri Lanka’s 26th Prime Minister on Thursday to stabilise the country’s debt-ridden economy and end the political turmoil.

The 73-year-old United National Party (UNP) leader took over as the prime minister as the country was without a government since Monday when President Gotabaya Rajapaksa’s elder brother and Prime Minister Mahinda Rajapaksa resigned as PM after violence erupted following an attack on the anti-government protesters by his supporters.