As Siddhanth Kapoor is detained in drugs case, Luv Sinha says, “Arrest the producers, dealers and not just the users” | Hindi Movie News 0
Read Time:1 Minute, 41 Second
Shakti Kapoor’s son, Siddhanth Kapoor was detained during a police raid at a rave party in a Bengaluru hotel on Sunday night. He is among the six people allegedly found to have consumed drugs, Bengaluru police had confirmed. He has been brought to Ulsoor Police Station for further inquiry. 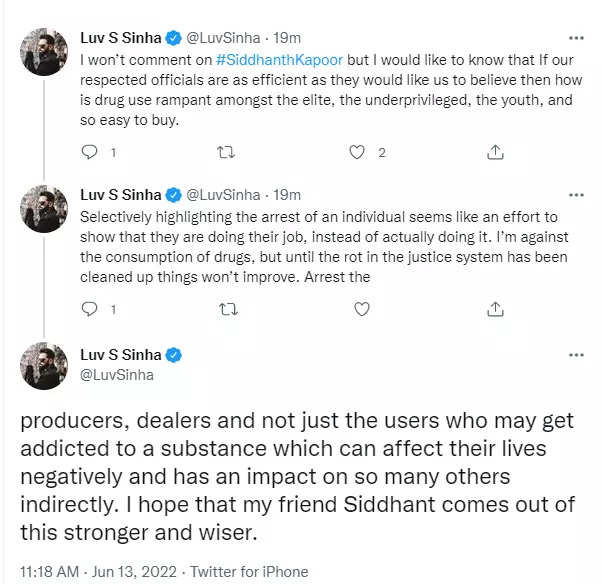 Reacting to this controversy, Shatrughan Sinha’s son Luv Sinha tweeted, “I won’t comment on #SiddhanthKapoor but I would like to know that If our respected officials are as efficient as they would like us to believe then how is drug use rampant amongst the elite, the underprivileged, the youth, and so easy to buy.”

He went on to demand that those involved in providing the banned substances to the youth should be arrested. Luv tweeted, “Selectively highlighting the arrest of an individual seems like an effort to show that they are doing their job, instead of actually doing it. I’m against the consumption of drugs, but until the rot in the justice system has been cleaned up things won’t improve. Arrest the producers, dealers and not just the users who may get addicted to a substance which can affect their lives negatively and has an impact on so many others indirectly. I hope that my friend Siddhant comes out of this stronger and wiser.”

On Sunday, the Bengaluru police was acting on a tip off and raided a hotel on MG Road where the alleged party was hosted. The cops are yet trying to ascertain whether Siddhanth Kapoor had consumed drugs at the hotel or had come to the party after taking drugs elsewhere. When ETimes reached out to Siddhant’s father Shakti Kapoor, the veteran actor stated, “I can say only one thing – it’s not possible”. Siddhanth had taken off to Bengaluru on Sunday, reportedly for a DJ gig there and an inside video of the same has also surfaced on the internet.