Blood Of The Chinese Cannot Be Shed In Vain: Beijing On Karachi Blast 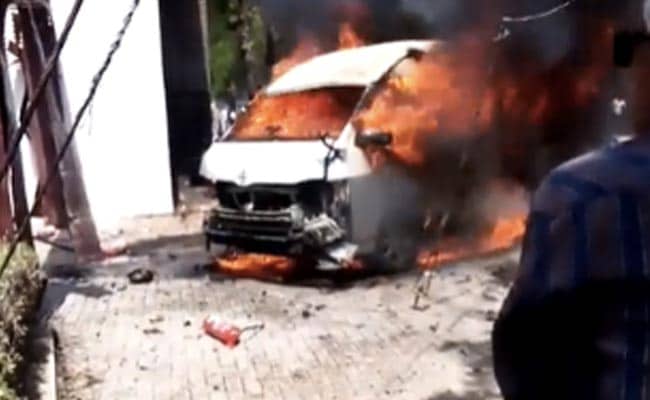 China on Wednesday asked Pakistan to scale-up security for its nationals working in the country and demanded a thorough investigation and punishment to the perpetrators behind the suicide attack at the Karachi University which killed three Chinese teachers and injured another.

The blood of the Chinese cannot be shed in vain, and those behind this incident will surely pay the price, a Chinese foreign ministry spokesperson said while strongly condemning the latest attack on Chinese nationals working in Pakistan.

An explosion triggered by a burqa-clad Baloch woman suicide bomber ripped through a shuttle passenger van of the Confucius Institute at the prestigious University of Karachi on Tuesday, leaving three Chinese teachers dead and one injured and causing several Pakistani casualties, in the latest targeted attack against Chinese citizens in Pakistan’s financial capital.

China expressed its “strong condemnation and great indignation” at the attack, as well as deep condolences to the victims and sincere sympathy to the injured and the bereaved families, the state-run Xinhua news agency quoted the spokesperson as saying.

Chinese Assistant Foreign Minister Wu Jianghao has made an urgent phone call to the Pakistani Ambassador to China to express extremely grave concern, the report said.

Wu demanded that the Pakistani side should immediately conduct a thorough investigation into the incident, apprehend and punish the perpetrators to the full extent of the law, and take all possible measures to ensure the safety of Chinese citizens in Pakistan and prevent such incidents from happening again, the spokesperson said.

The Chinese Foreign Ministry and Chinese diplomatic missions in Pakistan will continue to urge relevant Pakistani departments to handle properly the follow-up matters of those killed, treat the injured, and resolutely crack down on the terrorist organisation involved, the spokesperson said.

A spokesperson for the university said that three of the victims were Chinese nationals. They were identified as Confucius Institute Director Huang Guiping, Ding Mupeng, Chen Sa and Khalid, the Pakistani driver.

The spokesperson added that two others — Chinese national Wang Yuqing and a Pakistani man Hamid — were injured in the blast.

CCTV footage of the attack showed a burqa-clad woman standing outside the entrance of the Confucius Institute. The woman detonated herself just as the van neared the institute’s entrance.

A spokesperson of the BLA, the separatist outfit which is banned in Pakistan, the UK and the US, said that the attack was carried out by Shari Baloch alias Bramsh – the “first female suicide bomber of the brigade”. The attack marks “a new chapter in the history of Baloch resistance,” he added.

A picture of the bomber in circulation showed the woman along with her two small kids.

In a purported video issued by the group, a BLA spokesman said that the motive of the attack was very clear.

“It was a simple and clear message to China and Pakistan to withdraw immediately from Balochistan,” said the masked spokesman surrounded by armed men on a hilly terrain.

“Baloch Liberation Army guarantees you the CPEC will fail miserably on Baloch land,” the spokesman, who was holding an assault rifle, said in fluent English. He warned that a special unit has been formed particularly to attack Chinese officials and installations in Balochistan.

The group opposes Chinese investment in Pakistan, especially in the restive Balochistan, saying local people do not benefit.

This is not the first-time Chinese nationals have been the target of terror attacks in Karachi, which is Pakistan’s biggest city and economic hub.

In July last year, masked armed men on a motorcycle opened fire on a vehicle carrying two Chinese nationals in Karachi in which one of them was critically wounded.

In the same month, nearly a dozen Chinese engineers were killed when a bus carrying construction workers was “attacked” in northwest Pakistan.

In November 2018, Baloch separatists had attacked the Chinese consulate in Karachi but failed to break through the security barrier with three of them killed on the spot.

Thousands of Chinese personnel are working in Pakistan on a host of projects being carried out under the aegis of the CPEC.