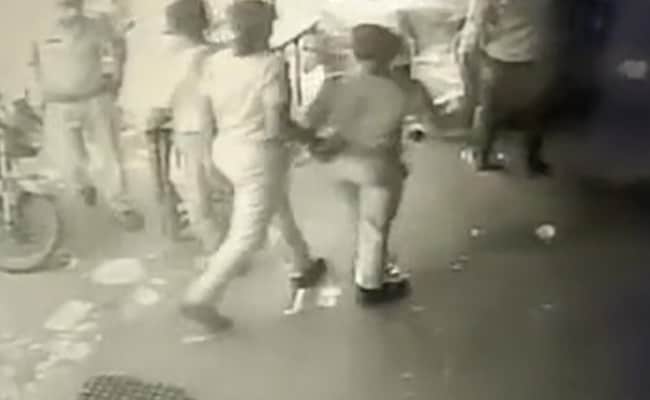 Among the 22 injured in the Ranchi protests, 10 are policemen and the others were protesters.

Twenty six people have been charged in Jharkhand’s Ranchi for the violence over recent remarks by now-suspended BJP spokesperson Nupur Sharma on Prophet Muhammad and Islam. Two people were killed and over 20 were injured during protests on Friday.

CCTV footage of the protest shows the police running from cover as the mob throws stones at them. One cop can also be seen in the video holding his head after he was injured during the protest. The crowd also threw vessels and plates at the police.

The protesters have been demanding the arrest of Nupur Sharma and expelled BJP leader Naveen Jindal for their controversial remarks on Prophet Muhammad.

Among the 22 injured in the Ranchi protests, 10 are policemen and the others were protesters. Three of the injured are in critical condition.

Ranchi police have filed nine FIRs and are investigating the matter. Police have filed cases against 26 named and 10,000 unnamed for taking out a procession and attacking the police on Friday.

“Police teams are investigating the matter. We have detained many people for interrogation. The matter is being investigated,” Jharkhand Police Spokesperson and IG Operations, Amol V Homkar, told PTI.

Curfew has been imposed in several parts of the Jharkhand capital that witnessed violence. Over 2,500 police personnel have also been deployed around Ranchi to maintain peace and order.