Here’s What Kriti Sanon Posted On 5 Years Of Raabta 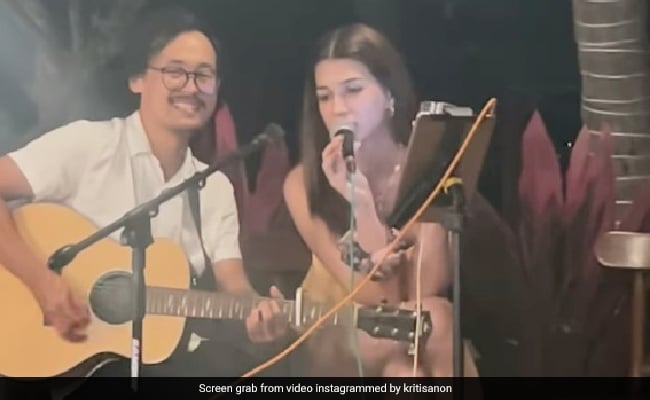 Kriti Sanon in a still from the video. (courtesy: kritisanon)

Actress Kriti Sanon celebrated five years of her film Raabta on Thursday with a special video. The Instagram post, which has won the hearts of fans online, features the Bollywood star singing the title track of the film with a guitarist in what appears to be a hotel. Dresses in a simple top, pair of shorts and with a coffee mug in hand, Kriti is at her causal best as she belts out the song amid encouraging nods from the unnamed musician by her side. The video even ends with the man telling Kriti, “Very nice,” which she acknowledges with a smile. Sharing the video, Kriti Sanon quoted the song in the caption: “Meherbani jaate jaate mujhpe kar gaya, guzratasa lamha ek daaman bhar gaya,” with an infinity emoji.

Kriti Sanon further wrote, “This one was special in many ways. A film full of memories. A journey close to my heart. And I’m glad to have walked it with the two of you: Sushant and Dinoo,” referring to her co-star, the late Sushant Singh Rajput and director-producer Dinesh Vijan.

In the post-script, the star added, “P.S. Excuse the singing, emotions are pure!”

Kriti Sanon also mentioned in the caption that the video was recorded by director Amar Kaushik. It appears that the singing session took place during the shoot of Amar Kaushik’s Bhediya which stars Kriti Sanon and Varun Dhawan.

The five-year anniversary of the film is no doubt bittersweet given that the film’s hero, Sushant Singh Rajput died in 2020. The film marks Kriti Sanon and Sushant Singh Rajput’s first and only collaboration. Though the film did not succeed at the box office, the lead couple impressed fans with their electrifying chemistry and performances.

After Sushant Singh Rajput’s death, Kriti Sanon had shared some stills have Raabta along with a note. An excerpt from the note from 2020 reads, “Sush…I knew that your brilliant mind was your best friend and your worst enemy. A part of my heart has gone with you and a part will always keep you alive…Never stopped praying for your happiness and never will.”

Kriti Sanon is currently basking in the love and recognition that came her way at the International Indian Film Academy Awards (IIFA) held in Abu Dhabi recently. Sharing a video of the run-up to the ceremony as well as Kriti receiving the Best Actress Award from Aishwarya Rai Bachchan, the actress said, “Zameen badli nahi…toh aasmaan badal gaya. When the crowd screams your name before it is even announced. The love for which I do what I do.  What a memorable evening!”

On the work front, Kriti Sanon will be seen in a bunch of projects including Shehzada, Bhediya, Ganapath, and Adipurush.