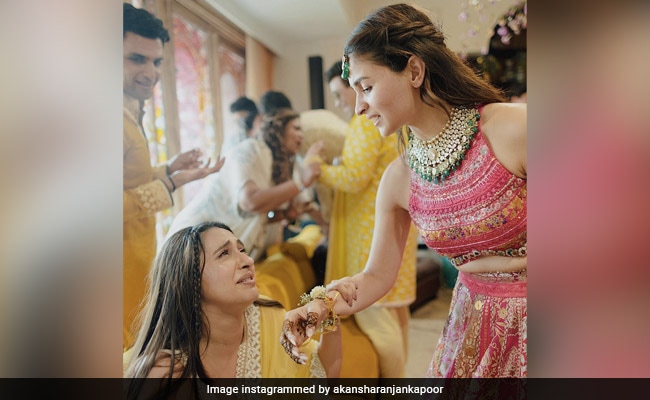 Akansha Ranjan Kapoor, who attended BFF Alia Bhatt’s mehendi on April 13, has shared photos from the function. In some of the photos, she is seen getting emotional and in one of the photos, Alia Bhatt is consoling her. Akansha has captioned the photos as “the (de)escalation of ARK’s emotions at every wedding, ever,” followed by many emojis. In the pics, Akansha has shown how her emotions change from being happy to sad at every wedding. Alia Bhatt commented, “Ded,” followed by an array of laughing out loud emojis. Akansha’s sister Anushka Ranjan wrote, “Hahahaha cried a lot I must say.” “Hahaha this is the cutest,” commented Athiya Shetty. Vaani Kapoor commented, “Hahahahaha Kanchu” and Huma Qureshi left an array of red heart emojis.

For Alia Bhatt’s mehendi, Akansha Ranjan Kapoor had worn a yellow saree with a white blouse.

Check out the photos here:

Alia Bhatt’smehendi was full of dance and “something out of a dream.” Alia had shared photos from her mehendi with the caption, “The Mehendi was like something out of a dream. It was a day full of love, family, our beautiful best friends, a LOT of French fries, a surprise performance by the ladkewalas, Ayan playing DJ, a BIG surprise organised by Mr. Kapoor (my favourite artist performed my favourite songs), all followed by some happy tears and quiet, blissful moments with the love of my life. There are days… and then there are days like these!”

Ranbir and the Kapoors had performed for Alia. In one of the photos, Ranbir was seen holding his late father Rishi Kapoor’s photo and in another, he had shown his mehendi with Alia’s name written on it.

Check out the photos:

Alia Bhatt and Ranbir Kapoor got married on April 14, in Mumbai.

On the work front, Alia Bhatt and Ranbir Kapoor will be seen together in Ayan Mukerji’s Brahmastra, which will release in September.

Filmmaker Brings Bling To The Party