Madonna To Selena Gomez, Count All The Stars At Britney Spears’ Wedding 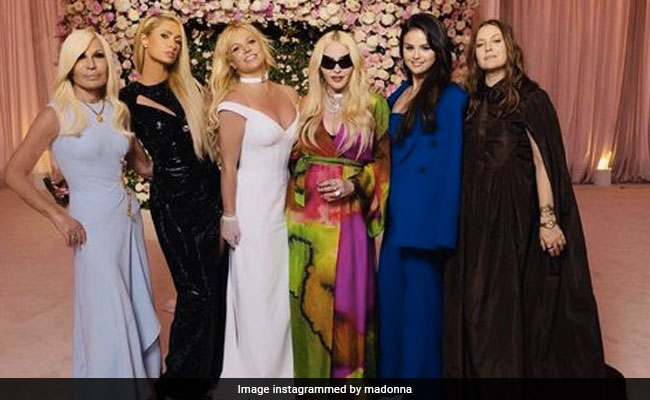 Pop Princess Britney Spears and her partner Sam Asghari’s wedding has been the talk of the town. The two exchanged vows at Britney Spears‘ luxury pad near Los Angeles on  June 9, Thursday. Inside pictures from the wedding festivities have flooded our feeds. And, now, the latest one shared by newlywed Britney Spears has our heart. No, it isn’t about the mushy pictures of the couple. We are talking about Britney Spears and her gang. From Madonna, Paris Hilton, and Donatella Versace to Drew Barrymore and Selena Gomez, the frame is giving major team bride goals. The next slide is from the post-wedding party. We see Selena Gomez, Drew Barrymore and, of course, Britney Spears dancing their heart out. No, we aren’t crying, you are crying.

Britney Spears, 40, has also wrote a long note for her friends. Calling it “the most spectacular day”, the singer wrote, “Wow. We did it. We got married, I was so nervous all morning but then at 2:00 pm it really hit me… We’re getting married. I had a panic attack and then got it together… the crew who created our home into literally a dream castle were fantastic. The ceremony was a dream and the party was even better.”

Britney Spears, in her caption, wrote a special message for all her friends. “So many incredible people came to our wedding and I’m still in shock. Drew Barrymore, my girl crush. And, Selena Gomez who by the way is way prettier in person if that’s possible both came.”

“There was a special mention for Donatella Versace. “Thank you Donatella Versace for designing my dress… I felt so beautiful.  I think we all fell on the dance floor at least 2 times. I mean come on … we were all voguing,” she said.

Selena Gomez was among the first to reply with a “love you” message. ​

Well, it doesn’t end here. Madonna and Britney Spears have also recreated the 2003 kiss at the post-wedding party. And, we have pictures too. Thanks to Madonna. “Britney, you look so happy and in love. I wish you and Sam all the best.  Last night was fun and sweaty.” The two singers had kissed during the ​​2003 MTV Video Music Awards.

What do you have to say about the fun pictures from Britney Spears’ wedding gala?