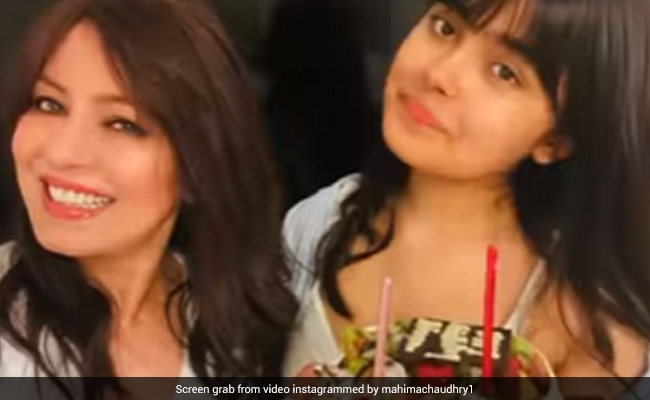 Mahima Chaudhry in a still from the video. (courtesy: mahimachaudhry1)

Pardes actress Mahima Chaudhry, who is battling cancer, flew to Mumbai just in time for her daughter Ariana’s birthday. The actress was shooting for a project titled The Signature in Lucknow, which is being made by Anupam Kher. On Saturday, she shared a video from her daughter’s birthday festivities on her Instagram profile and she wrote in her caption: “Ariana, a very happy birthday my baby, my life, my joy . Wishing you loads of joy and happiness and good health always.”

Check out the post shared by Mahima Chaudhry here:

The actress, in a recent interview with ETimes said, “I haven’t shared my diagnosis with my parents. They will hear about it on the news now. I want to get back and be with them. I have made a full recovery and I just need all the love and support to get going again.”

Earlier this week, Mahima Chaudry reposted a video originally shared by Anupam Kher and she wrote: “Thank you dear Anupam Kher for your love and support.” In the video, Anupam Kher revealed that the actress has been diagnosed with breast cancer and he wrote: “Story of Mahima Chaudhry’s courage and cancer. I called Mahima Chaudhry a month back from US to play a very important role in my 525th film The Signature. Our conversation turned to her discovering that she has breast cancer. What followed is in this candid conversation between us.”

Mahima Chaudhry, who was filming for The Signature in Lucknow, shared a video from the film’s set and she wrote: “Thank you for all your good wishes. The wishes and blessings have been pouring in since the morning while I’m at shoot on set in Lucknow on the film set of The Signature with the very talented Anupam Kher. I want to take time to thank each one of you.”