As the Uttar Pradesh Government intensified its crackdown against the Muslim protestors on June 11, several members of the ruling BJP, including its state president Swatantra Dev Singh, endorsed using bulldozers to demolish the properties of the accused persons.

The family members of two persons who succumbed to gunshot wounds during Friday’s protests in Ranchi against controversial remarks on Prophet Mohammad have claimed they were not a part of the procession that was taken out to condemn the comments. Two people identified as Mohammad Mudassir Kaifi and Mohammad Sahil died and over two dozen people were injured in protests and subsequent clashes that rocked the state capital on Friday over the remarks made by two suspended BJP functionaries against Prophet Mohammad, officials said.

Meanwhile, an uneasy calm prevailed on June 12 in West Bengal’s Howrah district, where Section 144 of CrPc has been clamped in some areas and internet services suspended following violent protests over controversial remarks on Prophet Mohammad by suspended BJP spokespersons, police said.

Bengal Police asks LoP not to visit violence-hit Howrah; he says will move court if stopped

Leader of Opposition Suvendu Adhikari headed on a collision course with the West Bengal Police on June 12 with the law enforcers asking the BJP leader not to visit parts of violence-hit Howrah district where prohibitory orders have been clamped but the Nandigram MLA retorting that he would move the court if he is stopped.

A letter, issued by the officer-in-charge of Kanthi Police Station at Adhikari’s hometown in Purba Medinipur district, stated that concern over his security was the main reason for asking him not to visit parts of Howrah district where Section 144 of CrPC has been imposed. – PTI

Tension prevailed in Jharkhand capital Ranchi on June 12, as shops and other establishments remained shut amid heavy deployment of security forces in the wake of violent protests over controversial comments on Prophet Mohammad.

Internet services, however, were restored in the district after nearly 33 hours, Ranchi Deputy Commissioner Chhavi Ranjan said. Around 2,500 police personnel are on guard at sensitive areas in Ranchi, where two people were killed and more than two dozen people were critically injured, as protests and clashes rocked the City after the Friday prayers.

The protesters have been demanding the arrest of suspended BJP spokesperson Nupur Sharma and expelled leader Naveen Jindal for their controversial remarks on Prophet Mohammad. – PTI

Asked about the outrage and condemnation from a number of Muslim-majority nations over the controversial remarks on Prophet Mohammad and calls that Prime Minister Narendra Modi should have intervened in the matter when the comments were made, senior Congress leader P. Chidambaram said, “Most certainly, yes, the prime minister should have spoken and acted immediately after the offensive utterances by the two (BJP) spokespersons.”

“The PM’s silence is baffling, but in tune with his silence on past occasions. It is sad that the government turned a deaf ear when Opposition parties, civil society leaders, writers, scholars and common citizens forewarned the government to put an end to Islamophobia, but woke up startled when 16 countries remonstrated against the utterances,” he said. – PTI 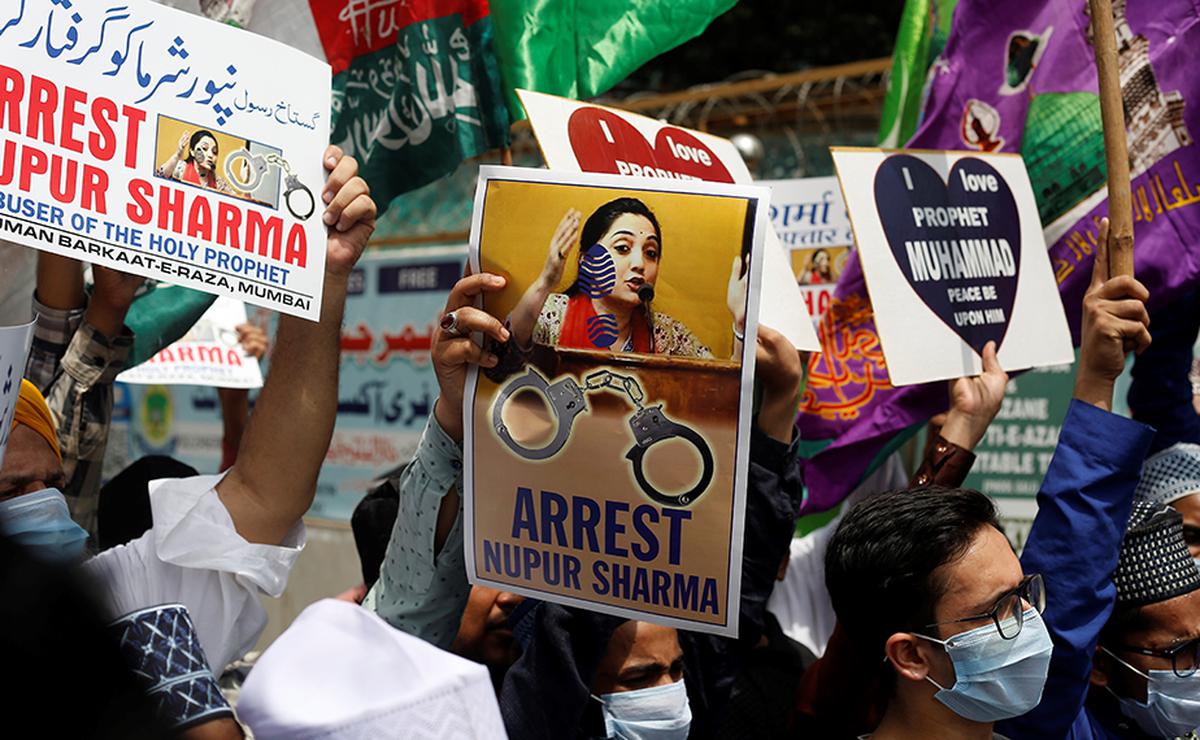 The Bhiwandi police in Maharashtra have summoned suspended BJP spokesperson Nupur Sharma to record a statement on Monday in connection with her alleged objectionable remarks against Prophet Mohammad, an official said on June 12.

Besides, expelled BJP functionary Naveen Kumar Jindal has also been asked by the Bhiwandi police in Thane district to record his statement on June 15 over his alleged controversial tweets against Prophet Mohammad, senior police inspector Chetan Kakade told reporters.

Two men have been arrested for allegedly promoting communal harmony and for holding a protest without permission to demand the arrest of suspended BJP spokesperson Nupur Sharma for her remarks against Prophet Mohammad in Jama Masjid area, police said on June 12.

The two were arrested on Saturday night and have been identified as Mohd Nadeem (43), resident of Jama Masjid area, and Faheem (37), resident of Turkman Gate area, they said. – PTI

The Uttar Pradesh Police has so far arrested over 300 people from eight districts of the State in connection with Friday’s violence during protests against the controversial remarks of suspended BJP functionary Nupur Sharma on Prophet Mohammad.

Elaborating further, Mr. Kumar said, “91 persons have been arrested in Prayagraj, followed by 71 in Saharanpur, 51 in Hathras, 34 each in Ambedkar Nagar and Moradabad, 15 in Firozabad, six in Aligarh and two in Jalaun.” Of the 13 cases, three cases each were registered in Prayagraj and Saharanpur, and one each in Firozabad, Ambedkar Nagar, Moradabad, Hathras, Aligarh, Lakhimpur Kheri and Jalaun, the senior officer said. – PTI

Clash between members of two communities in Gujarat town; cop among four injured

A communal clash broke out in Gujarat’s Anand district in which a police constable and three other persons suffered injuries, an official said on June 12.

Police have arrested 14 people in connection with the incident that took place in Borsad town on Saturday night over the issue of laying of bricks on a disputed plot of land, he said. Later, the police lobbed around 50 teargas shells and fired 30 rubber bullets to disperse the crowd, Deputy Superintendent of Police D R Patel said.

Heavy security has been deployed in the town and the situation is under control, he said. – PTI

Nupur Sharma | In the eye of the storm

Within a day of the diplomatic storm that broke out over remarks made by suspended BJP national spokesperson Nupur Sharma on Prophet Muhammed, during a TV show aired on May 26, another video clip of her went viral. This one was from 2008, when she was the Delhi University Students Union (DUSU) president from the Akhil Bharatiya Vidyarthi Parishad (ABVP), the student wing of the RSS. It was about a reported incident of a protester “spitting” at a former Delhi University Professor S.A.R. Geelani. Mr. Geelani had been given the death sentence by a trial court and later acquitted by the Supreme Court in the 2001 Parliament attack case. Ms. Sharma’s moment on television came when she, along with other students, stormed into a faculty seminar on the topic “Communalism, fascism and democracy: rhetoric and reality”, to protest against Mr. Geelani’s participation.

Uneasy calm prevailed on June 12 in West Bengal’s Howrah district, where Section 144 of CrPc has been clamped in some areas and internet services suspended following violent protests over controversial remarks on Prophet Mohammad by suspended BJP spokespersons, police said.

The situation in Murshidabad’s Beldanga, Rejinagar and Shaktipur police station areas, where internet services have been suspended following violent protests over the row, is also peaceful.

As protests mounted in several parts of the country over the recent controversial remarks on Prophet Muhammad by suspended Bharatiya Janta Party (BJP) spokesperson Nupur Sharma and expelled leader Naveen Kumar Jindal, the Ministry of Home Affairs (MHA) said it was monitoring the situation.

A senior MHA official told  The Hindu that an advisory has been sent to States regarding the protests.