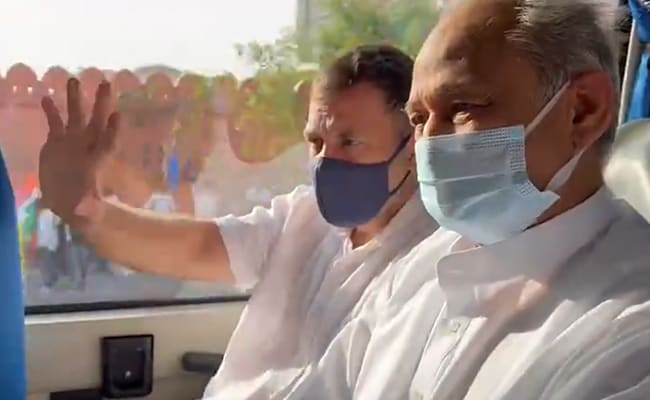 Rahul Gandhi took a train to Rajasthan’s Udaipur for the Congress Chintan Shivir in an image-correction exercise after the recent controversy over his Nepal nightclub video.

The Congress leader, bag in hand, boarded the Chetak Express with other senior leaders heading to the “Nav Sankalp Shivir”. He boarded the special compartment booked by the party.

The train ride, Rahul Gandhi was reportedly told by his advisers, would help him reconnect with the masses at a time the BJP has been highlighting a video of him at with friends at a nightclub in Nepal.

During the 12-hour journey that started at 11 pm on Thursday, Rahul Gandhi was greeted at every railway station by Congress leaders and workers from Haryana and Rajasthan holding up posters of him.

On his way to Udaipur in our train journey huge crowds welcome till now it’s 10.40 pm in more than 7 stops , Our leader ⁦@RahulGandhi⁩ accepts their love ❤️. pic.twitter.com/0GUHi3TopZ

For various Congress leaders and factions, it was a show of strength at stations. They were undeterred by the fact that the train would stop for only a few minutes. Rahul Gandhi made an effort to connect with them, said his aides, and accepted garlands and roses from as many as he could.

Early this morning, the Congress MP had tea at the railway station in Chittorgarh, where he met with the general public, mostly the youth, and listened to grievances like their failure to get into the army or the paramilitary forces. He also chatted with porters.

“It was not only employment. People also shared farmers’ concerns while Rahul-ji sipped tea at the railway station,” a leader said.

In a video shared by Congress leaders, Mr Gandhi could be seen stepping out of the train on his arrival at daybreak, to a grand welcome by party workers.

“At 5 am, Chittorgarh Railway station. Our congress leader #RahulGandhi being greeted by congress workers and local leaders,” wrote Manickam Tagore.

At 5 am , Chittorgarh Railway station . Our congress leader #RahulGandhi being greeted by congress workers and local leaders pic.twitter.com/5uujmuZcCm

Congress leaders who shared the journey gushed about Mr Gandhi reaching out to Congress workers.

Mr Gandhi is expected to address the brainstorming session amid calls for his elevation as Congress President when the party’s elections are due later this year.

The three-day “Chintan Shivir” will see more than 400 Congress leaders, including all three Gandhis, discussion challenges before the party and its long overdue reboot after a series of election debacles.