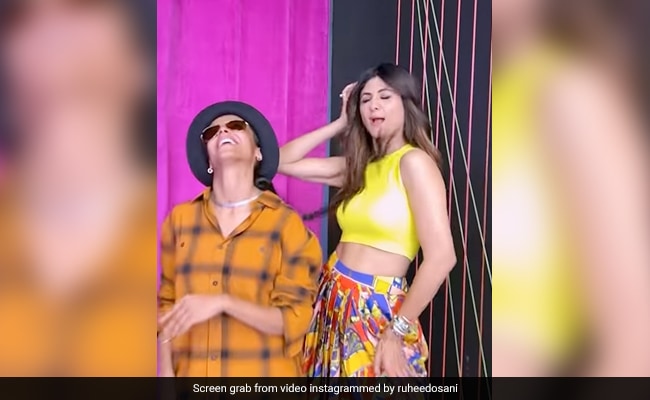 Shilpa Shetty and Ruhee Dosani in a still from the video. (courtesy: theshilpashetty)

Shilpa Shetty’s upcoming film Nikamma boasts of several foot-tapping numbers. On top of the pile is the title track of the movie that is quickly turning into a party anthem. The song is a recreation of Nikamma Kiya Is Dil Ne from the 2002 film Kyaa Dil Ne Kahaa. Now, Shilpa Shetty has been captured dancing to the song with content creator Ruhee Dosani. Ruhee has shared the fun video on Instagram tagging Shilpa Shetty. The video begins with a comedy of errors – albeit choreographed – and shows Ruhee tripping around Shilpa and even hitting the actress with her long plait. But as soon as the chorus picks up, the two are seen dancing their heart out in perfect synchrony.

On Wednesday, the same song was also the track that her fans and the Nikamma team chose for a flash mob performance. The flash mob was dedicated to Shilpa Shetty on her birthday and performed at her house. The actress has shared a video of her walking out to the balcony to meet fans who had gathered to wish her on the special day. As soon as she steps onto the balcony, the fans start dancing to Nikamma, only to be joined by the film’s lead actors Abhimanyu and Shirley.

Sharing the video, Shilpa Shetty said, “What a fab day. Thank you so much for this killer surprise and for making my birthday even more special,” she said tagging her team. “Dil Nikamma ho gaya…Overwhelmed, humbled, and blessed. With gratitude, Shilpa Shetty Kundra.”

Nikamma marks Shilpa Shetty’s return to the big screen after 14 years. Her previous acting role in a full-fledged film was in Hungama 2 but the 2021 film had a direct OTT release.

Nikamma is directed by Sabbir Khan, who is also co-producing the film with Sony Pictures International Productions. The film is scheduled to release on June 17, 2022.

Pregnant Alia Bhatt slams ‘archaic’ and ‘patriarchal’ reports; says, “I am a woman not a parcel!” | Hindi Movie News