The elephant tamers of Anamalai Hills For men from the Malasar tribal settlement, near Top Slip, taming wild elephants is a generational calling. From capturing the animal to gaining its trust, it is a laborious task, usually requiring several months and lots of resilience on the tamers’ part.

For men from the Malasar tribal settlement, near Top Slip, taming wild elephants is a generational calling. From capturing the animal to gaining its trust, it is a laborious task, usually requiring several months and lots of resilience on the tamers’ part.

One of the first scents every child born in Kozhikamuthi, a Malasar tribal settlement, near Top Slip, located in a core area of the Anamalai Tiger Reserve, may experience is the smell of an elephant. Before getting onto a tricycle like most children, they get to sit on the back of the pachyderms at the camps of the Forest Department.

Men from the tribal settlement, now comprising 120 families, have been taming wild elephants for generations and their story of camaraderie and resilience continues.

“I sat on an elephant at the age of four or five. My brother was a mahout at the camp, and I grew up observing how he gave commands and handled his elephant,” says R. Palanichamy, 47, one of the experienced mahouts of the camp, which now houses 26 elephants.

Entry of an elephant to the camp starts with the capture of the animal, which is usually a habitual crop raider or one with a history of causing human casualties due to problematic human-wildlife interactions.

“We seek the blessings of our ancestors and gods before an elephant capturing operation. We pray to them to guide us during the operation, which can go awry even with a single wrong decision. We also trust our kumkis (two of them usually sandwich the elephant to be captured after the target is sedated by a dart) while climbing on the top of the wild one and tying the rope around its neck — the most difficult part of the operation. Tying ropes around the feet of the wild elephant at the guard of the kumki’s limbs is also a risky task. Believe it or not, ancestors guide us in every operation,” says Mr. Palanichamy.

The mahouts, like many others in the operation, may not get the time to eat anything once the operation starts and the elephant is lodged in a kraal (a wooden enclosure meant for training). The Department appoints a mahout and a cavady (assistant) for the new elephant, and they stay with it for the next few months.

“We do not wash our clothes used during the operation until the elephant is ready for release (from the kraal many weeks later). Some mahouts abstain from taking bath for the entire period of taming. No fragrant items, including bath soap, are used. This is to get the elephant conditioned to the handler’s scent and make it feel that the human interacting with it is also in the dirt and has a natural odour,” explains G. Kumar, 44, another mahout.

In the first few days in the kraal, the mahout and cavady rub the skin of the animal from a safe distance using a stick. “Though elephants are called pachyderms (thick-skinned), the portion between the wrinkles is so sensitive that it can sense a mosquito bite. Through continued rubbing, the wild animal gets to lose the shyness and quick reaction. Slowly, the mahout starts to touch and pat the elephant and wins its confidence,” says N.S. Manoharan, Regional Joint Director of Veterinary Services (retired).

According to Mani, a senior elephant man and mahout of the celebrity kumki Kaleem, one of India’s most experienced kumkis, the most important part of the taming is conditioning and not punishing. Every action of the men should be to gain the trust of the elephant through positive and negative conditioning. 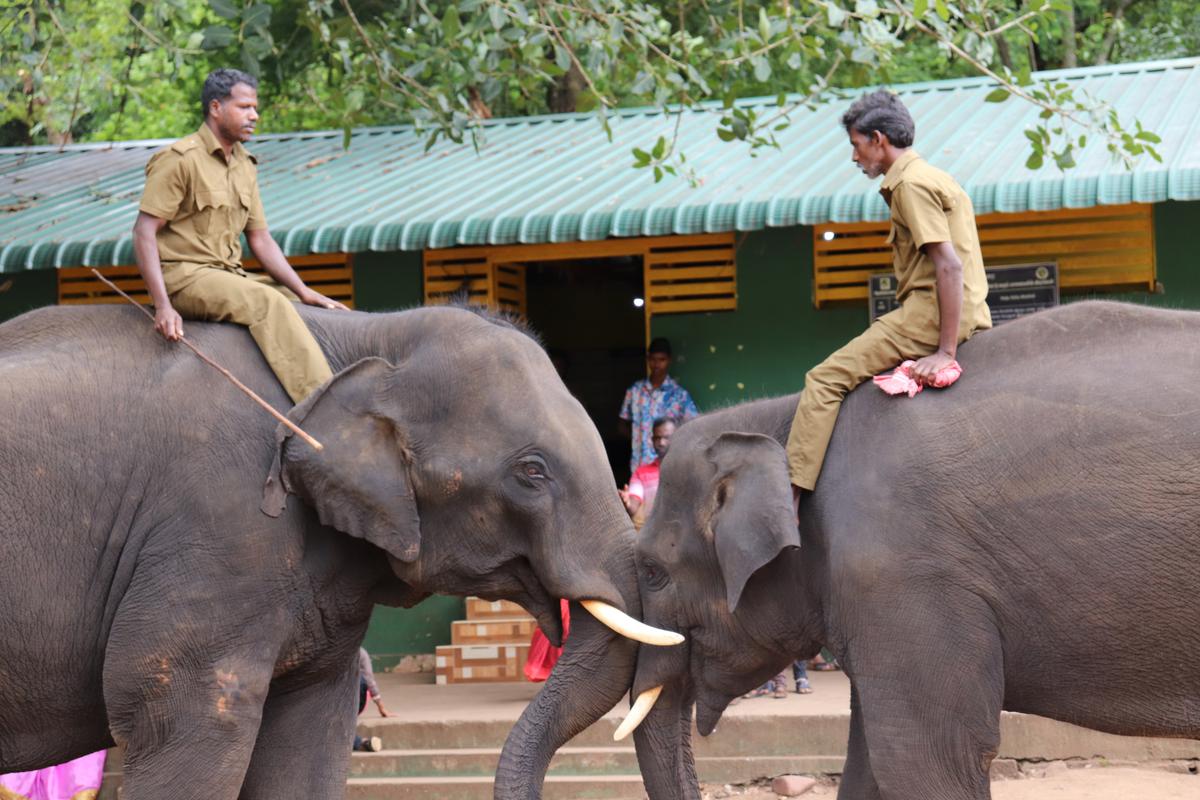 A mahout considers that an elephant has started accepting him when it does not react violently when he touches the animal and it starts accepting hand-fed food. They slowly start teaching the animal basic commands — vadtha (come), jaag (bend forelegs), vayittu (lie down), oottu (stand) and ssai (stop) to mention a few.

“There is no clear language for the commands. These have come from our ancestors and have roots in different languages,” says Mr. Kumar, whose father P. Gopal was also a mahout.

Member of the family

“Noted veterinarian V. Krishnamurthy, who was widely known as ‘ Yaanai Maruthavar’ (elephant doctor), used to say the training should be completed in 90 days. The animal should not be left in the kraal for several months. I have successfully tamed an elephant in 45 days. Once tamed, an elephant becomes a member of the mahout’s family,” says Mr. Palanichamy, who spent several years of his life as the mahout of Kalpana Chawla, a camp elephant that died in September 2020.

Mr. Palanichamy’s house is at the very entrance of the camp, and Kalpana would not enter or leave the camp without accepting something to eat from his wife, mother of five children, two of whom are now mahouts, he recollects. Now, Mr. Palanichamy is the mahout of Devi, with one of his sons, Somu, 21, as the cavady. Another son Kumar, 26, is off to the Wayanad Wildlife Sanctuary to tame an elephant.

According to Dr. Manoharan, the main difference in the kumki training in Tamil Nadu and some other parts of the country is that the tamers here focus on winning the confidence of the elephant, whereas those in certain other parts force the animal to obey.

Senior mahouts admit that the younger generation is not very keen to take up the job with the same zeal that the older ones had.

“With human-animal interactions increasing, kumkis will also be required to drive out wild elephants and carry out other operations. The government should further improve their job security, working conditions and salary to attract knowledgeable youngsters to become mahouts,” says elephant expert N. Sivaganesan.