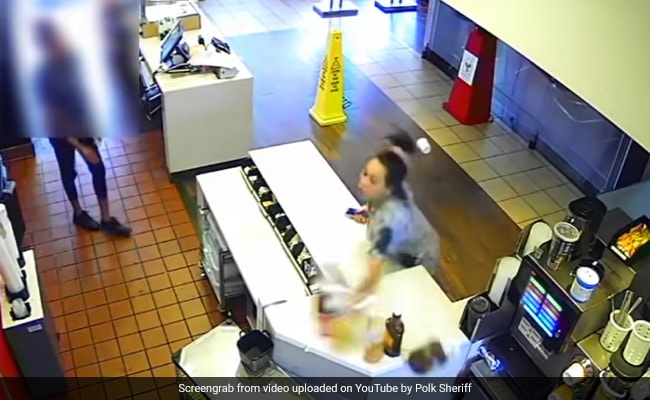 A woman from Florida was arrested last week after creating a scene at a local McDonald’s restaurant. The woman, identified as Tianis Jones by authorities, had gone to the restaurant to pick up her order but became overly irritated after the employees had got her order wrong.

The surveillance video inside the restaurant captured Ms Jones screaming at McDonald’s employees and throwing cups that were on the counter. She even managed to get behind the counter and hit a stack of cups in frustration. She then called the United States emergency number, 911, to complain about her order.

The local county sheriff, Grady Judd, released 2 minutes of that recording in which Ms Jones can be heard saying, “I’m at McDonalds, I’m five months pregnant…These people don’t know how to run a f****** McDonald’s. I want my money. They tried to cheat me out of my money. I want my money!”

In the video, another woman can be seen trying to calm her down but this doesn’t seem to work. She eventually does leave the restaurant but for some reason not before twerking.

The Polk County Sheriff’s Twitter account posted on May 21 saying, “PCSO is looking for Tianis Jones after she went McNuts in a Lakeland McDonald’s Thursday (5/19). “When we find her she won’t have any golden arches, but we’ll give her some silver handcuffs.”

The account posted an update writing, “On Friday Evening, May 20th, the Polk County Sherriff’s Office arrested Tianis Jones, who caused a disturbance at a McDonald’s restaurant in Lakeland the day before. In addition to the charges of Burglary with assault, Criminal Mischief, and Disorderly Conduct, Jones was also charged with Misuse of 911 to complain about the service during the ten minute incident Thursday, May 19th.”